Achutan Ramachandran Nair, widely known as A. Ramachandran, is a preeminent Indian artist of large-scale paintings and bronze sculptures that echo the visual motifs of Indian classical art. Born in 1935 in Kerala, his early works depicted the socio-political struggles of his home state in a modern, abstracted style. Later in his career, however, Ramachandran was profoundly influenced by the vibrant culture of Rajasthan as well as its miniature painting traditions, leading to the whimsical scenes of flora, fauna and mythological imagery for which he became acclaimed. He has also cited inspiration from Kerala murals, Nathdwara paintings and Ajanta cave paintings.

A. Ramachandran studied art at Kala Bhavana (Institute of Fine Arts) in Santiniketan, in addition to earning a Masters degree in Malayalam literature and later a doctorate with a thesis on Kerala mural painting. He has exhibited extensively in museums across India as well as abroad, including the United States, United Kingdom, Brazil, France, Singapore and South Korea. He has received numerous prestigious awards including the Padma Bhushan, India’s third highest civilian honor. In 2002, he was elected a Fellow of the Lalit Kala Akademi, and in 2013, he was granted an honorary doctorate by Mahatma Gandhi University in Kerala.

You are welcome to buy artist A. Ramachandran’s prints online or view them at our gallery in Palo Alto (San Francisco Bay Area). All serigraphs are signed by the artist. 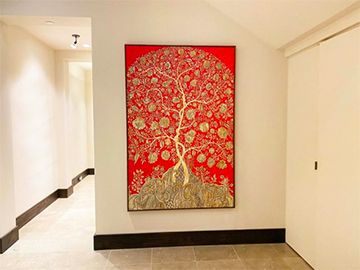 What is a serigraph?
Serigraphs are a type of high quality, limited edition screen print made on high quality paper in collaboration with the artist. A different ‘screen’ or stencil is created for each color, and then ink is pushed through the corresponding stencil onto the paper. This printing process is repeated multiple times, using a separate stencil for each color. A single serigraphic print can have as many as 25 colors or more. Each print is then numbered and signed by the artist.

Are the serigraphs signed?
Each print has been hand-signed by the artist and also comes with a certificate of authenticity.

Is shipping available worldwide?
Yes, we offer both domestic and international shipping, and all fees are on actuals. We frequently ship throughout the US as well as to Europe, Africa and Asia.

How are the serigraphs shipped?
Prints are packed by professionals and shipped rolled in a tube. Each shipment is covered by transit insurance. All fees are on actuals.

Are the serigraphs framed?
No, serigraphs are sold unframed. However, works on paper must always be framed to properly protect them from warping and discoloration. You can read more advice about framing on our blog.

How should the artwork be taken care of?
As a resource for clients, we have written a guide on the best art care tips for works on paper.

This website uses cookies to improve your experience while you navigate through the website. Out of these cookies, the cookies that are categorized as necessary are stored on your browser as they are essential for the working of basic functionalities of the website. We also use third-party cookies that help us analyze and understand how you use this website. These cookies will be stored in your browser only with your consent. You also have the option to opt-out of these cookies. But opting out of some of these cookies may have an effect on your browsing experience.
Necessary Always Enabled
Necessary cookies are absolutely essential for the website to function properly. This category only includes cookies that ensures basic functionalities and security features of the website. These cookies do not store any personal information.
Non-necessary
Any cookies that may not be particularly necessary for the website to function and is used specifically to collect user personal data via analytics, ads, other embedded contents are termed as non-necessary cookies. It is mandatory to procure user consent prior to running these cookies on your website.
SAVE & ACCEPT